Chosen and Approved: Lessons from David for the People-Pleasers (Like Me) 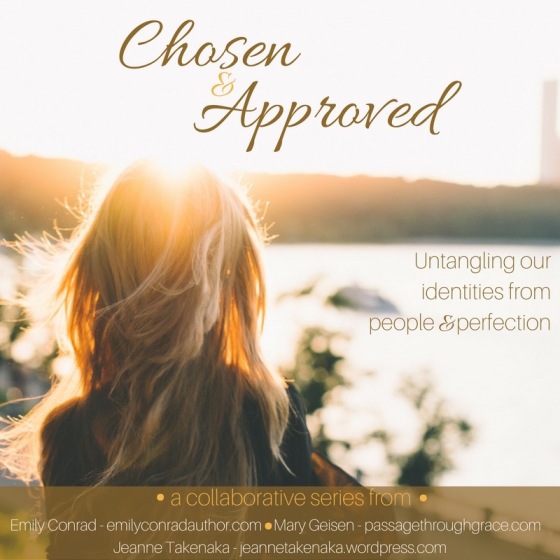 Welcome to part three of our six-post series, Chosen and Approved: Untangling Our Identities from People and Perfection, with Emily Conrad, Mary Geisen and me.

This week, Emily shares all about King David . . . and his failings . . . and how God called him a man after His heart. How did David manage that?

When I read this:

The people-pleaser in me would have a hard time praying the same prayer as David. That part of me would demand I focus more energy on rectifying the situation with people than with God.

I nodded my head at the idea that I needed to focus my energy on rectifying situations with people before I did so with God.

How off-base I have been at times because I was so afraid to offend people. God forgives, right? But people? Not always.

So, of course, I needed to make sure I fixed any offenses I’d caused.

God does forgive. And He invites us into a relationship with Him. He tells us to set Him above anyone and anything else. This isn’t as easy for me as it should be. And those people-pleasing mindsets I’ve held to for years die hard.

In her post, Emily shares some great insight into the mindset of a God-pleaser. I hope you’ll read and glean as much as I have.

Join me over at Emily’s place and see what David did that helped him to be called a man after God’s heart.

If you’ve missed either of the first two posts in this series, you can read them at this link.

Sign up for monthly notes filled with encouragement, updates, and glimpses of how God shows up in each day. Receive free encouragement resources!

Thanks for signing up!

Sign up for monthly notes filled with encouragement, updates, and glimpses of how God shows up in each day. Receive free encouragement resources!

Thanks for signing up!